skip to main | skip to sidebar

Location: 955 Bunting Avenue, Grand Junction, Colorado 81501
Direction: The corner of Houston and Bunting Avenue that is the other side of Mesa State College west gate. 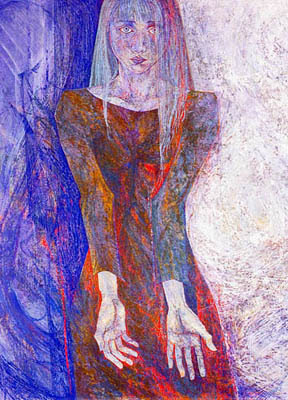 Fumiyo painted “Hanatsu” (Set Free) to release herself from the limitation she imposed on herself while improving her art career. After finishing this piece she stopped painting figures and started seeking for new subject matter.

When Fumiyo was a little girl she loved drawing and painting and she hoped to be an artist. When she was a high school student she learned technical skills of drawing and water color painting. She learned Japanese traditional painting and art education at Kyoto University of Education. Immediately after her graduation, she became a member artist of “Seitoh-sha” which was a group of professional artists who exhibited at Nitten (Japan Fine Arts Exhibition). Since then she has been an artist and art teacher.

At first, she painted many self-portraits and other figures to represent deep inside her. The more she painted figures, the more narcissistic she became. As Fumiyo became professional, she also became more serious about painting technique and her art career.

One day, she found her art threatened by mannerism. She felt herself restrained as if she were trapped in a cage made of too much ambition and ego. She realized that she had lost her feeling for art which she had had in her childhood. When she was a child, she drew, painted and even made fabulous stories with them just for fun. She never cared about a career as a successful artist when she was a little artist who just loved to create. She was missing her simple and innocent joy for making art.

Fumiyo painted “Hanatsu” to regain the joy of art and her real life. Encounters with interesting people and their ideas or spirits have given her precious memories and inspired her art. Also the daily life with the family gives her a great deal of inspirations.

Since Fumiyo gave birth to her daughter in 2005, she has drawn her daughter almost everyday. She is painting figures again, but now with a more generous sprit than she had ever had.
Posted by fumiyo yoshikawa at 2:39 PM No comments: 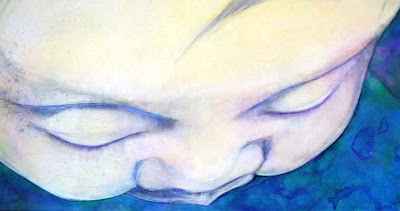 "Tuki Madoka” is literally translated "The Moon Full”. Tsuki means the moon in Japanese. Madoka is an archaic Japanese word, which means circle or sphere that is a symbol of fullness and contentment, harmony and integration.
Fumiyo named her daughter “Madoka” hoping that the child would grow up as a warm and gentle person who would make everybody happy.
The face of the child represents the moon that shines on people quietly and makes them calm and peaceful.
Posted by fumiyo yoshikawa at 5:10 PM No comments:

fumiyo yoshikawa
Born in Kyoto, where she studied Japanese art and history, Fumiyo Yoshikawa specializes in Japanese brush painting methods, sumi-e and nihonga. She has exhibited widely at museums and galleries in Japan (among others, the Tokyo Metropolitan Museum, Kyoto Museum, Takashimaya fine Arts Gallery) and in the United States. Since graduating from the Kyoto University of Education in 1987, Yoshikawa has been a member of the association of professional nihonga artists of Kyoto and taught brush painting and water color in Japan. She has been teaching in the U.S.A. since 2004, when she moved to the San Francisco Bay Area, California. Yoshikawa is dedicated to introducing the aesthetics of Japanese culture to a wide range of people through lecturing and demonstrations of nihonga and sumi-e at a number of institutions including the San Francisco Asian Art Museum, Colorado Mesa University, and the General Consulate of Japan in San Francisco.